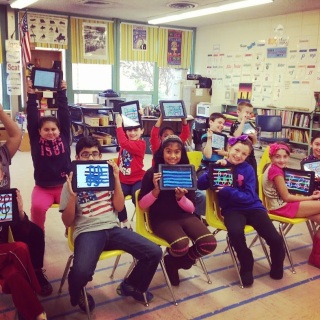 I have read with great interest Larry Cuban’s three-post series titled The Lack of Evidence-Based Practice: The Case of Classrooms Technology. As someone who supports the integration of more resources for students and educators, I think there is some truth to Mr. Cuban’s words. However, as someone who has seen a number of anti-EdTech posts over the years, I also feel strongly that there is no new information here.

It is quite easy to find examples where large amounts of money were spent on devices for schools with little forethought given to intended outcomes or professional development. We need look no further than Los Angeles Unified School District (LAUSD) which seems to be the poster child for anti-iPads/Devices in schools.  The bottom line in this whole conversation is summed up in the tweet below from Will Richardson.

Unfortunately, I have spoken with many administrators who have spent money on devices without a firm understanding of what they intended to accomplish with them. But despite the fact that I believe the schools and districts who have integrated technological resources thoughtfully are in the minority, I am tired of those like Cuban who wish to throw the baby out with the bathwater. We need to put our energy into finding outliers where things are working well and highlight the steps that were taken in these schools and districts.
Assertions that success stories do not exist are false. But the difficult part here is pinpointing the real cause of success because it has much more to do with the mindset changes regarding learning than it does with the deployment of devices.  School communities that embrace a more constructivist mindset where students are encouraged to create their own understanding of key concepts with access to modern technological resources are what we all need to strive for.
As Tim Holt points out in his rebuttal to the Cuban posts, Taking On Larry Cuban and The Case of Classroom Technology (Parts 1, 2, and 3), it is ironic that Cuban is utilizing technological resources like his blog and his Twitter account to get out his message. Imagine if he encouraged schools to teach students to use such platforms to connect and learn with others who share their passions on a particular topic? I imagine some of his colleagues at Stanford could show him some evidence of the successful integration of technology to impact student learning.
Anyway, I am left to ponder the Five Stages of Innovation and wonder whether or not Mr. Cuban will ever hit the fifth stage?

The Five Stages of Innovation

— Inspired by Alexander von Humboldt’s ‘Three Stages Of Scientific Discovery’, as referenced by Bill Bryson in his book, ‘A Short History Of Nearly Everything’.  (source – http://www.philcooke.com/five_stages_of_innovation/)