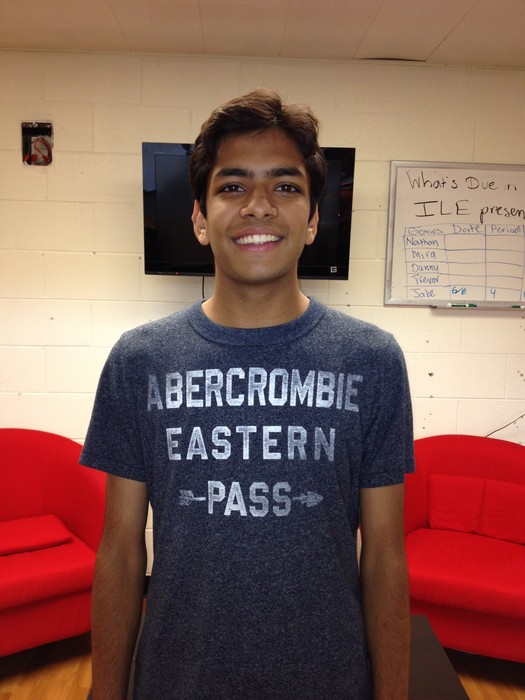 Last week, I was afforded the opportunity of perusing through Burlington High School’s main office hallways, through the art and photography studio, into the heart of BHS math with Mr. Khan’s AP calculus class. The BHS Help Desk shirt, customized for each individual tour guide, was merely the beginning of an imaginatively free session of “touring,” a time when I was able to show teachers, administrators, and parents from around the world how BHS has implemented technology into its classrooms.
I, as a tour guide played the role of the messenger, answering questions and giving a general rundown about how an iPad may be helpful in “navigating a simulated cell,” throughout a biology class, or reading “ebooks” for an English class, ultimately making highlighting and note taking more accessible and effective. We even learned how Mr. Khan uses Notability and different calculator applications for different functions in his math classes. Although I gave the tour myself, it was not simply I who was talking. Quite the opposite, no one was “talking,” because the tour was much better described as a “conversation” between administrators and tour guide, as I aimed to engage administrators with the tour rather than lecture at them.
A few prime examples of questions included: How do students use their study period? How are iPads used in foreign language classrooms? Is Burlington a BYOD school? I’d like to address each of these questions in their respective order, the first of which lends itself to explaining the truly open-minded, innovative ideology behind constructing the Burlington curriculum.
Walking into the library, administrators witnessed a Google-like “lounge” area, where students seemed to be heavily focused on their iPads. I won’t deny that students play games (in class and out of class), but I will argue that students have learned individual responsibility not only for their lives but for their education; the underlying principle is that distractions, by definition, will always exist. However, it’s the idea that we need to learn how to effectively deal with these distractions that Burlington advocates for. Thus, throughout daily 45-minute periods, students are not only working, but they are also taking charge of their education and learning invaluable life skills, the most conspicuous being time management.
The second question is one of my favorites, as I am a prospective linguistics major (yes, yes I know linguistics isn’t the same as languages). iPads are used heavily within foreign language classrooms as they allow for intensive involvement with reading, writing, speaking, and listening (especially the latter two). We were able to witness first-hand Señora DeSousa’s Spanish classroom using the iPad for a listening exercise. Personally, I find the iPad’s extremely effective and useful, as they launch students into the real world (as they listen to real interviews and read real newspapers).
Lastly, BHS is not officially a BYOD school, however this doesn’t stop students from bringing their own Mac’s (and yes even Windows at times) per their own convenience. Burlington doesn’t restrict. It only opens doors. Ultimately, like in any school, it’s up to the student to take those opportunities or not (and see whether those opportunities resonate with them).  Being in the spotlight was…well…empowering. I experienced profound joy in knowing I have the power to advocate for and perpetuate Burlington’s ideology of intellectual freedom. As an avid public speaker, I had the most trouble with reigning my thoughts in at the end of the hour long tour as I had so much to say and so little time to say it. Nevertheless, this experience proved extremely invaluable and I sincerely hope to showcase Burlington and all of its talent to even more administrators in the future.
Best regards,
Nikhil

Thanks to BPS Mobile Learning Coach Jennifer Scheffer for all of the planning for today’s program to discuss our 1:1 efforts at Burlington High School. The slides from the presentation are below along with a brief Storify of the morning with our guests. As is the norm, our students and staff were tremendous with their insights and openness about teaching and learning in Burlington

Thanks to BPS Director of Technology Integration Dennis Villano for the great overview of our Middle School 1:1 program that will begin next month!

Marshall Simonds Middle School will soon be Burlington’s second full 1:1 school. The BPS EdTech and IT Teams have been preparing for the deployment to students. Here are some important details about the initiative.

Marshall Simonds teachers have been working on developing digital content and materials. Teachers have also selected curriculum based apps to be installed on student iPads. Although student iPads will have just over 40 apps installed during the initial deployment, we have always believed that any 1:1 program should not focus on just the device and apps. iPads and 1:1 environments provide students with constant access to powerful digital learning tools. These tools can be used to help create engaging content and lessons. Burlington continues to focus as much as possible on what we call Foundational Apps. We are also committed to having students and teachers use cloud based apps and services.

Foundational Apps provide students and teachers with powerful digital content creation, distribution, and storage. Students can use these apps to complete assignments and return completed work to teachers. While not all classrooms will be paperless, the workflow provided by our Foundational Apps can enable teachers to use digital forms of content as much as possible.  These apps serve as the basic workflow for students and can be used in any curriculum area.

Please see the BPS EdTech Apps blog for a complete listing of MSMS apps. Click on the Middle School category tab to see all the apps being installed on MSMS iPads.

One of the best aspects of the Burlington High School 1:1 program has been how BHS students have take an active role in the learning process. Students have been involved in every step of the program from initial planning to daily classroom best practices. The 1:1 program has given students many opportunities for leadership in the program. A great example of this is the BHS Student HelpDesk.
Marshall Simonds will also have a similar program to the BHS Student HelpDesk. Each homeroom will have two Student Tech Leaders who will assist with the iPads and iPad Cart Management. Students will also the opportunity to be part of a new MSMS Student Tech Crew that meets during activity block periods.

The MSMS iPad program will have the added benefit of some great new classroom technology. Marshall Simonds has recently completed a major renovation as part of a Massachusetts School Building Authority project. Every MSMS classroom has been outfitted with new wall mounted LCD projectors and AppleTVs during this project. Teachers also have access to the Reflector app for iPad mirroring. AppleTVs and Reflector provide MSMS with an outstanding technology infrastructure driven by a student centered classroom.

All MSMS students will receive their iPads during introduction sessions. These sessions will be similar to the iPad Driver’s Ed sessions that we have completed during the deployment of all BHS iPads. Students will learn about responsibility, care, foundational apps, workflow, and expectations.
MSMS families were welcomed to a special 1:1 introduction night on Monday, January 7. Here are some key points if you missed the event:

Please continue to follow this BPS EdTech blog and the Marshall Simonds Middle School blog for more details and information about the 1:1 iPad program. We will also have posts about upcoming Parent Technology Events and family learning opportunities.
Dennis Villano, Director of Technology Integration

The BPS EdTech Team is excited to announce a technology information night for Marshall Simonds Middle School families. The event will provide important information regarding the upcoming 1:1 iPad program at MSMS. All students in grades 6-8 will have access to iPads while at MSMS during the school day. We will be discussing student responsibility, classroom workflows with the device, foundational apps, and how the devices will be managed.

Please join us on Monday, January 7 at 7pm in the MSMS cafeteria. Members of the BPS EdTech Team and MSMS staff will be providing details about the program and answering questions.